In 2009 we were asked by Ronimo Games if we were interested in designing sound and music for a new IP they were working on. They showed us their ideas and we were right away very enthusiastic about working on it because it gave us so much ideas and opportunities to live out all our creativity to design the audio universe of the whacky space fantasy MOBA.

This is an article we wrote in February 2012 after the game was released which gives insights about the design process of the complete audio of the game for which we eventually worked on for about 10 years!

The development of the music for Awesomenauts started halfway through 2009, at a listening session with the whole Ronimo team, the four members of SonicPicnic, and a few beers. Based on the first sketches and early prototypes of the game, everyone brought along a couple of existing music tracks which they found particularly fitting to the theme and style of the game. Everyone at the table had a different idea about what would be appropriate, so we ended up with a broad spectrum of musical styles and tastes – ranging from metal to hillbilly western tunes.

Luckily, there were some aspects to the music that everyone seemed to agree upon. Most of the tracks were fundamentally electronic or had synths, samplers and drumcomputers playing an important role, whether they were techno, glampop, or electrometal. There was also a strong preference for music that could be heard in games like Streets of Rage, Alien Breed, Project-X, and other games that we used to play on the Sega Megadrive/Genesis and Commodore Amiga. No doubt the graphical style of the game had something to do with that, as it strongly refers to games from that era. Finally, as the game oozed chaos, mayhem and wackiness - the character backstories, the gameplay, the colors, everything – we felt like we had to capture that in our music too, perhaps more than anything else.

Even though we were sure we didn’t want to tie ourselves down on one very specific style, we all agreed that the music should have a strong electronic component. If anything, we wanted it to be wacky, and have some historical reference to the early 90’s.
There was still plenty of room to differentiate within these boundaries, and we really stretched these to their limits when it came to creating the character-specific jingles. Froggy G, for example, has a smooth, somewhat oldschool-hiphop theme, and the jetpack-wearing monkey known as Yuri has a revolutionary Soviet march with a drunk Kozakian Choir. 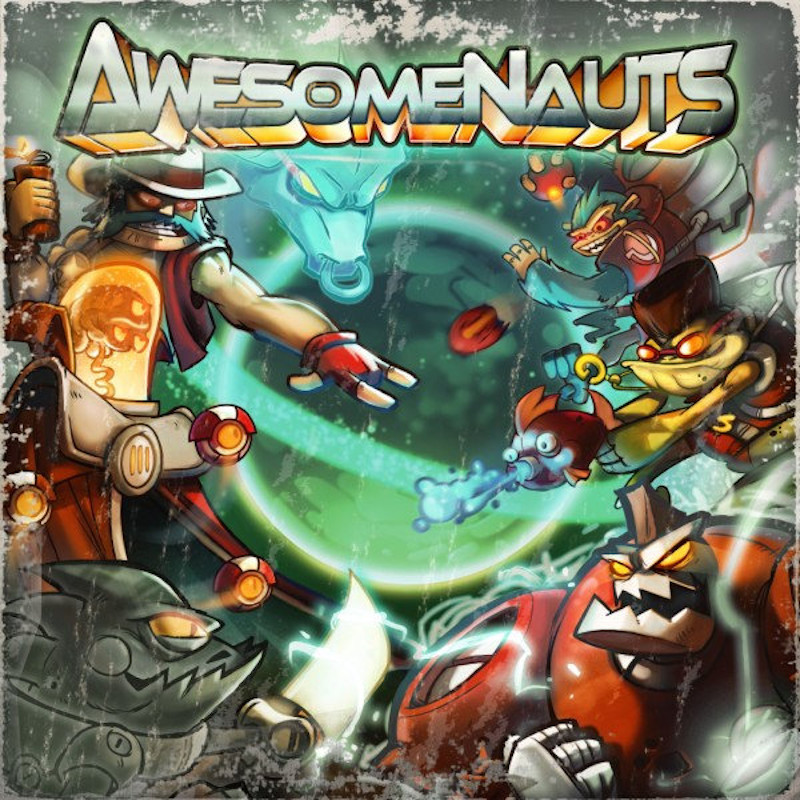 Apart from their jingles, each of the six characters was also linked to one of the ingame tracks. When the player starts a game, they will be hearing any one of the ingame tracks chosen at random. It kind of feels like a jukebox that has been set to shuffle. Each track lasts for about 3,5 minutes, and the game just continues playing random tracks as it progresses. The bond between the character and its ingame track becomes apparent when the player achieves a ‘killing spree’. At that moment, a beefed-up version of the ingame music starts playing – which is really a mash-up of the recognizable character jingle and a regular ingame track.
With this new song pouring out of their speakers, the player gets the feeling of being an unstoppable, unbeatable superhero for a while, until, after a specific amount of time, the killing spree track flows back into the regular ingame music. After a few matches, players will be able to recognize their characters’ tracks from amongst the other tracks, and their ‘moment of fame’ will become greater still.

For the menu, we decided to compose a retro-futuristic synthesizer tune (like the synthesizer music of the seventies and eighties) to really get that space/sci-fi feel. We also composed the ‘Victory’ and ‘Defeat’ jingles that play at the end of each match in the same style, to make sure the melody is nicely interwoven throughout the game.

The title music was a special case: Ronimo wanted to have a hand drawn animation film introducing all the characters and explain the (rather shallow) storyline in a typical 80's cartoon style. The great inspiration for this sequence came from series like Thundercats, M.A.S.K. and Galaxy Rangers. From the start, it was perfectly clear that this animation just had to be supported by a glam-muscular-power-rock theme.

This was absolutely great fun to compose and write, but we originally limited ourselves to a 30 second intro to fit the length of the animation. But when the theme was released as part of several trailers that Ronimo made for the game, lots of people became excited about the song, and asked us where they could hear the complete version of the song... Which doesn’t exist... yet. So yes, we’re creating a longer version of the intro music and will turn it into a complete hit-length track. Tell your friends!


The intro sequence to Awesomenauts


Recording vocals for the Main Theme 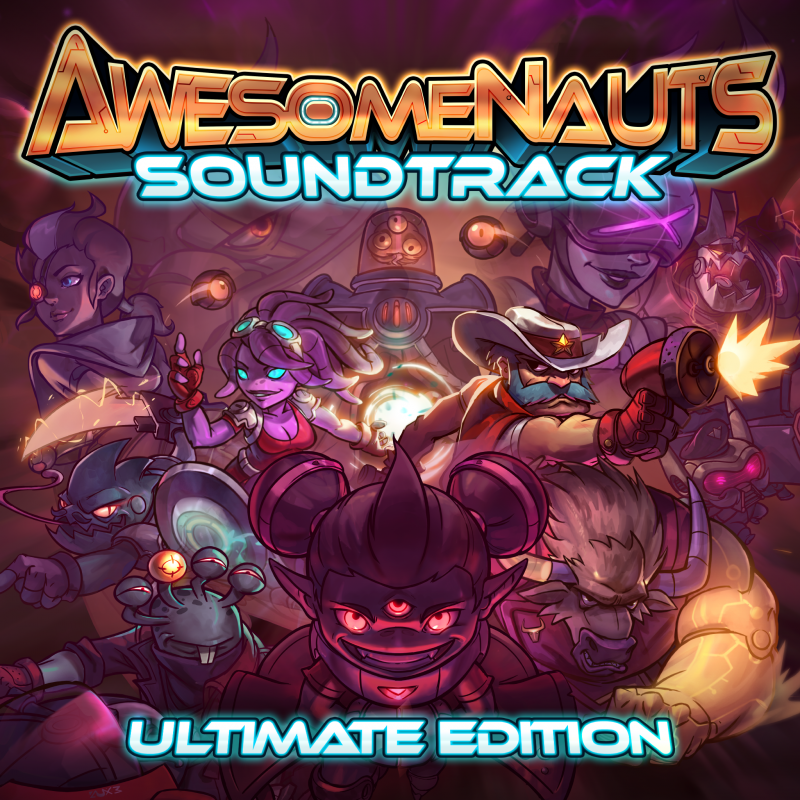 Aside from the electro sounds, the music in Awesomenauts can also be a bit cheesy at times. This reaches its zenith in what finally ended up as the credits music. One of the tracks that we came up with during our initial brainstorm was a song by Demis Roussos (Forever and Ever). We all agreed that there had to be something like that in the game somewhere, because ‘cheesiness’ and ‘wackiness’ are terms both Ronimo and SonicPicnic keep in very high regard. So we came up with a song called “You will ever always be my only Awesomenaut.” We originally intended it for the grand moment of victory in a match, but when it was finished, Ronimo found it to be a little bit (well, quite a little bit) too much when compared to the cheesiness of the rest of the music. So it got banished to the credits. That means it’s still in the game though, so reason enough to check out those credits!

At the very first stages of our work on the game, we put a lot of placeholder sounds in the game. We gathered a lot of different sounds from our own library and we also created a bunch of simple ‘soundsketches’, and implemented them into a very early build of the game. This gave us an idea of how the game would work with sound, and acted as a starting point from which we could experiment with different types of sounds.
There are actually a few placeholder sounds that made it in the final build of the game (after some minor editing), for the simple reason that they just worked very well. As with every development process, there were a few features and objects that got axed as development progressed. Some of these had very cool sound effects, so we tried to find a new use for them in the game wherever possible. Sometimes we had to kill our darlings though… but that’s part of the job.

Because Awesomenauts is set in a sci-fi setting, we decided to focus on creating many of the sounds with synthesizers. This fits the graphical style very well, so all the interface sounds and many of the in-game sound effects have been created with a synthesizer. For example, the ‘powerswing’ from the sword of Leon Chameleon, or the charging of the droppod before it’s being launched onto the battlefield, and the time bubble skill of Yuri.

Besides the many synth-created sounds, we actually used a lot of real life recordings. The alarm that sounds when a turret is under attack is a good example of this. One day we were working in our studio, and it was 12:00 on the first Monday of the month. That’s the time when the air raid sirens are being tested in the Netherlands. We thought it would be nice to use that alarm so one of us quickly put a microphone out of the window of our studio in Utrecht and recorded the alarm. We edited it, put some processing on it like EQ and some reverb, and put it in the game to test it. It was spot-on, and it’s been in the game like that ever since! Another example of sounds we recorded are the footsteps for Froggy G. It is a very simple sound actually, which was created by one of us stomping his hand against his bare leg (not too soft). Yes, sound design is a painful job sometimes…

We recorded five voice actors for the voices of all the characters. Almost all of these recordings were processed afterwards. For the voice of Clunk, we used a vocoder and we pitched the sound a little to create his distinct robot sound. For the voice of Voltar the Omniscient, we used a lot of signal processing to get his voice to sound like it's coming from a bulb through a little speaker.
For Froggy G we layered two recordings of the same sentence, to give his voice a little multi membrane, froggy sound.
There’s actually lots of fun to be had during the recording of weird and funny character voices.

We have worked together with Ronimo Games on Swords & Soldiers, their previous game. Compared to that project, we were much more in control of the audio implementing with Awesomenauts, all thanks to the new Ronitech engine. We were able to put sound cues on almost every animation ourselves, instead of asking the programmers for cues. This way we were able to set parameters for timing, loops, volume, whether the sound should always finish, etc. Furthermore, we had control over the distance, pitch and volume variation and instance limiting (time between triggers and quantity of sounds played in a group). It was great to have more control over the audio, and it helped us work more efficient.

The mix of all the different audio elements is very important, and at first we made a mix in which all sounds were quite loud. This didn’t feel quite right, as a loud explosion has to stand out in order to be impressive. It was quite a challenge to get the mix right, as we wanted to keep a dynamic feel to the sounds (so when you have a higher skill e.g. a bigger bomb you can drop, it would sound louder), but also wanted the music to stand his ground and be constantly strong and bold.
That left the smaller, more subtle sound effects, like footsteps, that enrich the overall experience, in need of a place somewhere in the mix. As always with mixing, it was all about balance. And especially in this game, where a lot is happening at once, the mix was a pretty difficult puzzle.

In the end, when all sound and music had been implemented, combined, and tested, we were quite happy with the awesome result. We hope you will like it as much as we do!

As you might know after the release of Awesomenauts we worked for about 7 years on the audio of the game, a lot of characters were added (total of about 34 with multiple skins per character now) which each needed their own unique voice , sound effects and music. The soundtrack expanded and consists of more than 100 tracks!

Check out the Awesomenauts Soundtrack here

You can play Awesomenauts on Xbox One, Playstation 4 or STEAM